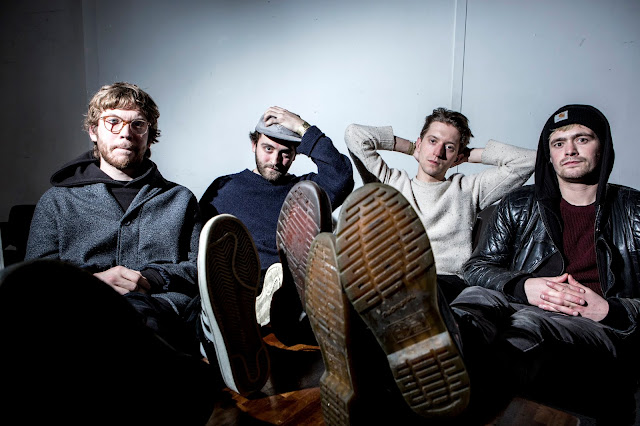 We’ve been lucky to have followed the rise of Heavy Lungs from juniors under the guidance of IDLES to their meteoric attack on the post-punk scene. Heavy Lungs have just released their new 4 track EP last week ‘Straight To CD’ so James Wadsworth of Underscore Part 3 had to catch up with lead singer Danny Nedelko on their tour to hear what he had to say about it.

Hi, you’re half way through your Independent Venue Week tour, how it going?
Yeah its been awesome so far, so flattering to have so many people at our shows on our first headline tour. That’s mental [that many dates have sold out]!
It looks like you’re having a lot of fun; do you have any funny stories to tell us from this tour?
We’re having so much fun it’s hard to pin point a single thing, just the five of us in the van we have our fun.
Last time we spoke you were on tour with good friends of your IDLES; how have things changed for you since then?
It’s nice for us to be selling out our own shows, things are picking up its surreal and humbling.

Nah it’s not weird its humbling. I don’t get recognised as much as you think I should but sometimes people do.
We’ve noticed a step up for Heavy Lungs in every way since then; what have you learned and what’s changed for you as a band?
We’re trying to get tighter, to write better songs and grow as a band. Watching their [IDLES] performance is an incredible thing and it pushes you to be better in every way and seeing your friends playing every night is amazing.
It seems there is a scene growing partly around Bristol and partly around similar styled bands; you, IDLES, JOHN, LICE and others all seem to stick together, what’s the scene like playing in bands in Bristol and the UK like right now?
I guess with JOHN they’re the loveliest nicest guys and it’s great to play with each other. Witchhelm are pretty good and Giant Swan are incredible. It always changes, it’s nice to make friends with the bands that are performing, making relationships and playing shows together.
The video for Jealous depicted a frantic Danny with themes of excess and narcissism, can you explain the video?
The song is about the self-destructive notion of jealousy and the video is an abstract portrayal of that feeling and someone being a victim of themselves and their vices. I’m really proud of the video, hopefully we’ll work with them [the directors] again.
You’re just about to release your 4-track ep Straight to CD on February 7th what can fans expect of the previously unreleased tracks?
The 2 unreleased tracks, we haven’t played for a while, the last one is a bit of an odyssey and the other one has a bit of a groove to it.
Track 2 on your new ep is called Roy, who is Roy and what’s the song about?
Roy is a character from a book and the notion is yearning to be a friend even if it’s a fleeting friendship that completely encompasses you and changes you but without owning you and helps shine a light on the qualities you never knew you had and give you confidence.
Is English your second language and how easy do you find writing in English?
My first language is Russian, my second is English. Sometimes they come easier, sometimes it takes longer and reading helps the most; Jealous came quite fast.
KEXP have been giving you lots of support and are including you in their UK shows, what do you about those events that you can share?
Absolutely surreal after spending hours watching those sessions online for DJ Kevin Cole to know who we are I’m speechless. It’s going to be quite a special performance and you’re going to hear a new song.
What else do Heavy Lungs have planned for the year?
Some festivals coming up and continue writing, we’re playing Farm Fest and Live At Leeds and others.
Musicians first hand get to see the next generation of acts often sharing stages with them; what upcoming artists are you loving right now?
JOHN, really loving JOHN, the new Fat White Family track is sick, Slowthai and whatever The Magic Gang do; every time, amazing!