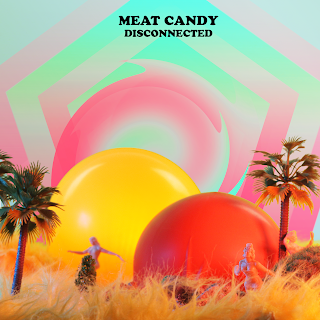 ‘Not many bands can keep throwing out different song ideas every month and have them all sound great!’

‘Disconnected’ is the fifth monthly single from the Meat Candy boys who have set themselves the task of releasing 8 singles, one each month ,which will be released as a collection called ‘Psych Aux Tropiques’ later this year on Dirty Melody Records.‘Disconnected’ shows the brilliance of doing an 8-single experiment; it’s a very different direction from the ‘signature’ Meat Candy pysch, stoner, grunge rock sound. The track starts with a ‘flan’ drum beat intro throwing us straight into a track with a more power pop/punk rock feel that is directed by a series of drum beats all based around a driving snare drum and chuggy riff. Ironically for a track named ‘Disconnected,’ this is the track that will connect with a wider fanbase than ever before due to less demonic guitar tones and a riff that could have sat easily on Ash’s album ‘1977’. The chorus has two elements with the latter being based around some surf rock sounding ‘ohh woo’s’ showing Meat Candy’s ability to throw yet more influences into their melting pot of sounds. To finish the track, Meat Candy step up a gear with a high octane riff and axe wielding guitar solo moving back into territory they’re more familiar with.

As soon as we put this track on we knew we were dealing with a different beast to some of Meat Candy’s previous singles. However with a captivating riff and singalong chorus we were pleasantly surprised and in no means disappointed. 8 singles in 8 months is an ambitious task; a task that will shape the band and their sound. Revealing your band’s internal R&D department to the public is a very honest statement which we appreciate but feel that for fans to identify with the band’s sound after this period they need to settle on what they deem is the ‘Meat Candy sound’. Whatever this sound is, we’ll be following their road to success. Not many bands can keep throwing out different song ideas every month and have them all sound great!