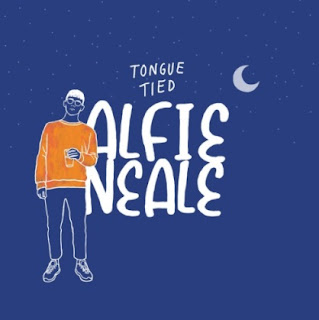 If Alfie Neale’s previous well-received release Liquor Dreams saw him in the realms of the otherworldly, Tongue Tied is a no less beguiling journey through life’s harsher realities. Alternating between stardust-speckled balladry and head-nodding groove, like a life-affirming pulse in the temple, Tongue Tied is the most promising work yet from the Brighton-based prodigy.
Neale has created a fluid-form song, littered with flourishes and details. The sedated lost-for-wordsbridge before the opening chorus is a joy, as are the call-and-response riffs that follow. Saxophone drifts in and fades away, like headlights in the blackout of a rain-soaked night. A scattergun rap namechecks Sinatra and the Black Pearl, there are falsetto backing vocals; it shouldn’t really work but somehow it does, perhaps in keeping with the lyrical ebbs and flows of the piece.
The track inhabits an evocative world of basement-bar noir, of vain hopes, best intentions and missed cues. “I’ve been drinking far too much,” persists a rum-impaired Neale, barely concealing the lameness of his excuses. There is desperation and resignation, words already doomed by the actions before them; the fear of accepting the inevitable, all the while knowing that there’s no point throwing the dice any more. “She could be my holy grail,” he muses, with the air of a man who knows that he has already let her slip through his fingers.
The romance and nostalgia of Tongue Tied continues in the vein of Neale’s best work so far, with immediate hooks and fastidious arrangement. Neale has crafted a beautiful torch song, a swing-me-round-baby for last-gasp dancefloor lovers, clinging to each other as the clock ticks towards closing time, too scared to go home alone.
Words Iain Dalgleish
Twitter Facebook
Tweet
Share
Pin
Share
0 Shares
We use cookies to ensure that we give you the best experience on our website. If you continue to use this site we will assume that you are happy with it.Ok