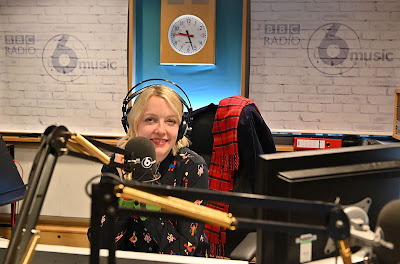 Credit BBC/Mark Allan
If Lauren Laverne’s new programme title sounds like it’s meant for you; take a chilled start to the day, you’ve found your perfect programme. Prince’s Starfish and Coffee was Lauren’s opening track which began her perfect tracklisting of well-crafted pop. If you didn’t listen live we strongly recommend checking out the show on the BBC iPlayer Radio app or BBC Sounds app which it will be available on for the next 28 days. Other gems Lauren played included Thundercat, Unknown Mortal Orchestra, Santigold and much more; Lauren’s playlists are always fantastic but this one was especially great coming across as though Lauren knew this might be her one time to win over new fans; and win them over she did!
Lauren engaged with her audience in a sensitive manner, understanding that a DJ’s ability to be personal is limited by its very nature; realising that she has possibly a new audience who don’t know her, Lauren humbly offered her introductions to the audience and asked listeners to introduce themselves and ‘how long you’ve [listeners] been part of the 6 Music family’. Throughout the show she read out heart-warming intros with people asking Lauren to look after them on their walk to work which she agreed she will do, among other wholesome stories. Breakfast radio is often as wired as its caffeine-fuelled listeners but the delight in this show is that Lauren has brought from her previous show her more mellow tone of delivery and has aimed it exactly as the programmes title suggests: at music lovers.
Tragically Lauren lost her father in late 2018 prompting an understandable short period of time off work. We all at Underscore Part 3 empathised with her grief and were delighted to hear Lauren mention her Dad and her annoyance with his Steely Dan records as a child. We can hope this shows that Lauren is beginning to find peace in this inevitably difficult time. This level of intimate human conversation endears us as listeners and will have likely endeared others.
To compliment Lauren’s outstanding playlist, she packed her debut show with every exclusive she possibly could! 10 songs in, Lauren shocked listeners and possibly herself exclusively playing the new Lizzo single ‘Juice’ telling listeners it had arrived overnight. Later in the show, Lauren interviewed 2 surprise guests; fellow DJ Norman Jay MBE and Glastonbury legend Emily Eavis to reveal some secrets about the 2019 festival. Between clear friendship-built telephone banter with Emily suggesting that Lauren should present her show from the Glastonbury office (something she has done before) the pair revealed exclusively that Janelle Monae will be headlining the West Holts Stage at Glastonbury 2019. Emily also revealed secrets about other attractions telling Lauren that ‘Aradia are working on a completely new design – an incredible structure to build a new show’. Emily went to add, ‘Block 9 are expanding with a mind-blowing installation, when it’s in the field it will be incredible’ and revealed that ‘The Park will have something new, near where the Teepees were, so there will be a new area there, lots happening’. In its 50th year, Glastonbury constantly reinvents itself not happy to rest on its legendary name. Ever since Glastonbury had Jay Z in 2008 as one of its Pyramid Stage headliners the event has toyed with more ‘pop’ styled acts, having already announced grime artist Stormzy as one of 2019’s headliners.
BBC Radio 6 Music have continued in the manner they always have by going against the grain, this time with Lauren stepping away from ‘typical’ breakfast radio with hyperactive jokes and banter to jolt listeners alive. We love it and we know you’re on this site because you’re a ‘music lover’, so we wish you all safe journeys to work with the exceedingly competent Lauren Laverne.
For full details of the new BBC schedule head to our preview
https://www.underscorepart3.co.uk/2019/01/preview-the-relaunch-of-bbc-6-musics-day-time-programme-schedule.htmlhttps://www.underscorepart3.co.uk/2019/01/preview-relaunch-of-bbc-6-musics-day.html