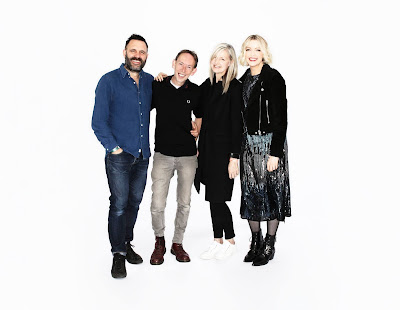 L-R: Shaun Keaveny, Steve Lamacq, Mary Anne Hobbs, Lauren Laverne
Tomorrow is a monumental day for British radio, women in the media and in particular BBC Radio 6 Music who launch their new scheduling. With 3 male and 2 female presenters over 5 programmes at the helm Monday to Friday between 5am- 7pm we at Underscore Part 3 are excited to see a more equal representation of women in BBC 6’s day time schedule.
For those not currently familiar with 6 Music, it is the UK’s biggest digital (DAB) only radio station which launched in 2002 and stands itself apart from all other radio stations as one of the only stations that’s target market is active music fans and not passive listeners. With this style of programming you are sure to find a show to fit you with many shows (outside of prime time) being aimed specifically at a genre; an extremely popular example of this is DJ Craig Charles Funk and Soul Show on Saturday between 6pm and 9pm. Recently the BBC relaunched their iPlayer Radio app under it’s new banner BBC Sounds which will allow you to listen to radio shows, podcasts, music and more at your convenience if you are not able to listen live.
If this hasn’t sold you yet, we hope this fascinating anecdote about David Bowie will get you changing your dial to 6 Music. In 2010 the BBC announced plans to shut 6 Music by the end of the year which thankfully was averted due to protests by the public and much outcry by famous listeners including Mark Ronson, David Bowie and even the stations own presenters. To compound this was an anonymous billboard campaign throughout the country emblazoned with large ‘save 6 music’ banner adverts. The BBC have never officially confirmed to Underscore Part 3 the exact circumstances around these billboards but in the week of David Bowie’s death a mournful Steve Lamacq revealed live on air that he had now been given a tip off that it was David Bowie who funded and orchestrated this! With one of the most important British artists ever rumoured to have self-funded his own campaign to support this muso’s paradise it clearly shows the importance of the station whose listenership has tripled since 2010 overtaking its sister station Radio 3.
The new scheduling is as follows:
Monday to Friday
5am-7.30am Chris Hawkins (previously from 5am-7am)
7.30am-10.30am Lauren Laverne (moving from 10am-1pm)
10.30am-1pm Mary Anne Hobbs (moving from 7am-10am, Saturday and Sunday)
1pm-4pm Shaun Keaveny (moving from 7am-10am)
4pm-7pm Steve Lamacq (no change)
Saturday and Sunday
7-10am Mark Radcliffe and Stuart Maconie (moving from weekdays, 1pm-4pm)
Monday’s debut shows include guests and features with Idris Elba in conversation with Mary Anne Hobbs, Steve Mason and Matt Everitt chatting with Shaun Keaveny and Steve Lamacq will be making an announcement about Independent Venue Week 2018.
Although this is a big shake up fear not new listeners. All the presenters are extremely well known to Radio 6 and this is simply a shake up to freshen our favourite (and only) station that Underscore Part 3 play in the office and our homes on a daily basis!
In the BBC press release Paul Rodgers, Head of 6 Music, commented that “Much-loved presenters playing amazing music is at the heart of what 6 Music does, and these schedule changes will help deliver an even greater range of music on the station across daytime and weekends.”
With Lauren Laverne moving to the extremely coveted breakfast show slot the jubilant presenter said that “I’m so excited about our new show and delighted to be part of the next phase of 6 Music’s evolution. Whatever the day brings for our listeners we intend to get them ready for it with a fantastic selection of music and guests who have something worth hearing to say. I can’t wait to get started!”
Lauren is taking over from the legend that is Shaun Keaveny who appeared in his pstatement equally happy at the prospect of the fantastic Lauren Laverne taking over his slot as he was about getting a bit more sleep! “The last 11 years, four months and three days of breakfast radio has allowed me to create an entire world of daftness, aided and abetted by my most wonderful listeners, who I’m chuffed to be able to leave in the care of my relay partner, Lauren Laverne.
“Breakfast radio has reduced me to the kind of person that cries at traffic lights and remonstrates with shopping trolleys, so I give joyful thanks for the opportunity to take my show into the afternoons and sleep past 5.13am. There I’ll try my best to eventually build a show that’s a worthy successor to the legacy of Mark and Stuart, two of my genuinely favourite broadcasters.”