Happy 2000 may or may not be named after the Southampton Chinese takeaway of the same name but have the undoubted privilege of opening up for Fontaines DC on a night where they (or anyone else for that matter) may have otherwise expected to have been playing in front of a few mates, the bar staff and a couple of regulars. It is to their credit that they set about vigorously engaging the early arrivals with an assortment of minor-chord punk rattlers which belie their otherwise upbeat moniker. With little more than a couple of Soundcloud demos to their name to date, Happy 2000 are nonetheless determined to engage the assembling numbers, aided by a lead singer who has clearly set his sights on sparking off a mosh pit. To his credit, he succeeds. The set is rough around the edges but shows promise, not least of all on the goth-flavoured heads-down tune that brings their short set to a close. 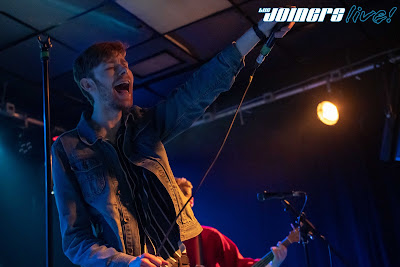 You can’t ask for much more than a main support band that would send you home happy as headliners. Sisteray’s set starts strong and keeps climbing; blessed with big hooks, sloganeering choruses, power chords and a driving rhythm section. To call Sisteray a punk band might be truth, but somehow also seems to sell them a little short. Wannabescould sit happily on Slade’s Greatest Hits, a pop-art poke at vanilla-flavoured puppet artists. Sisteray are the antithesis of this. They have more than plenty to say, their political hearts worn reassuringly on their sleeves. Queen’s English is an all-too-recognisable mirror image of UK austerity in a Brexit age, complete with introduction from the British monarch imploring the just-about-managing generation to live within our means. Sisteray capture the essence of our self-defeating tendency to blame everyone but the real culprits. 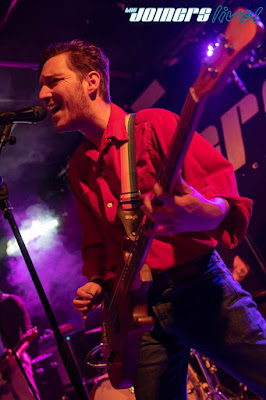 ‘“We ain’t your target market,” repeat the Londoners [Sisteray]. The irony is that they have found theirs.’

1:57 makes a fine stab at calling up the ghosts of Grebo and, as in the rest of the set, says what it needs to say while refusing to overstay its welcome. White Knuckle Joyride captures the vibe of Definitely Maybe-era Oasis without the necessity to suffer any Gallaghers. It sounds exactly like you imagine it will. Highlights of the set are Sisteray Said, another two-minute instant classic shot through with a battering of relentless Steve Jones guitar; and Algorithm Prison, a wry commentary on modernity that subverts the city-that-never-sleepslabel in an age of can’t-turn-it-off social media obsession. “We ain’t your target market,” repeat the Londoners. The irony is that they have found theirs.

The concept of credibility, sincerity, of being real has been a discomforter for many a generation of artists, long before Richie Edwards scrawled “4REAL” into his forearm with a razor blade. For the tragic Manic Street Preacher, this was a torment borne out of a misperceived taunt; one that had momentarily broken him. For Fontaines DC, this authenticity is an imposition, taken as a birth right. The only question is whether or not you can handle it – and as far as they’re concerned, it’s your fucking problem.

‘Grian Chatten is in equal measure an unnerving and compelling stage presence; a caged tiger prowling the stage, instinctively caught on the cusp of fight or flight.’

Grian Chatten is in equal measure an unnerving and compelling stage presence; a caged tiger prowling the stage, instinctively caught on the cusp of fight or flight. Akin to a long-distance traveller at a petrol station toilet, there is a need for release; a palpable sense of a man on a precipice. Fortunately for a highly expectant crowd at The Joiners, Chatten is immersed in his performance tonight; each song a short episode of perfectly corralled emotion. Each lyric tumbles out, announced in an apparent stream of consciousness which belies the deftness and detail of the poetry; Joyce for the twenty-first century. 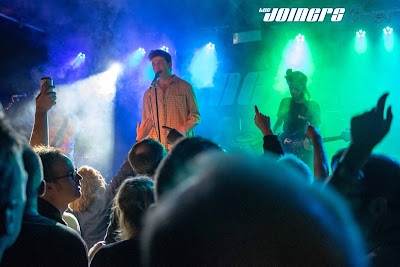 Every staging post of the post-punk journey is present in Fontaines DC. Chatten’s delivery is set somewhere in a no-man’s land between the brashness of Mark E Smith and the more reflective honesty of fellow Dubliner, Fearghal McKee. The Joy Division comparisons are irresistible, even if they don’t entirely hit the mark. The temptation to anoint Chatten as a Celtic Curtis is there, but there is no St Vitus Dance alongside the physical similarity. This is about a sense of purpose provoking the unease of the listener. Instead, the frontman punctuates the narrative with clenched fists, eyes wide: “Is it too real?”

‘There is no sense of cockiness from the musicians, merely an assurance borne out of artists at the absolute peak of their game.’

Those uneasy listeners reared on Fontaines DC’s limited recorded output to date are treated to an onslaught of sound in the live setting; songs like Hurricane Laughtertake on an extra gear creating an enormous wall of noise, duelling guitars forging terrible beauty. The music emanates from the band, taking it beyond the component parts; this is not a standard gig, it’s an event, a communion; a virtuous cycle of band and audience feeding off each other. Individual egos are subsumed in the racket; from the stage and in front of it, all limbs are flailing. There is no sense of cockiness from the musicians, merely an assurance borne out of artists at the absolute peak of their game.

‘The Joiners feels like a comet has blown through it.’

Any doubts as to where Fontaines DC will take this next are dispelled by the quality of the so-far unreleased material being showcased tonight, which already hints at greater light and shade within the band’s canon. The album is clearly going to be a belter and they know it. For a band that has chosen to raise its profile with smart support slots alongside shame and IDLES, here is an outfit soaring into the Big League. Of course, there is no encore. In the aftermath, The Joiners feels like a comet has blown through it. In the tradition of so many acts that have blown the roof off this careworn corner of Southampton, you know they will never be back. That’s the scheme of things round here. And no one will be looking over their shoulders for one second.
Setlist:
Chequeless Reckless,
Sha Sha Sha,
Big,
The Lotts,
Hurricane Laughter,
TV Screens,
Roy’s Tune,
Too Real,
Liberty Belle,
Boys in the Better Land.
Words Iain Dalgleish