Of all the places you expect to find an entire evening devoted to showcasing Dirty Hitartists, an enormous agricultural building in rural Devon perhaps wouldn’t be top of anyone’s list. Westpoint, with no little grandiosity, refers to itself as an arena. Merely entering the venue is enough to dispel any such delusions. As first impressions of the night go, it’s a disappointing one. Westpoint is not a music venue by any stretch of the imagination and it is hard to feel anything but pity for the misguided devotees who stayed out all night under tin foil in sub-zero January temperatures inhaling what one must euphemistically call the smell of the countryside.
First support act, the Manila-based songwriter/producer No Rome, is the unfortunate recipient of a half-empty shed. The beneficiary of explicit endorsement by tonight’s headliners which extends to a collaboration with The 1975’s Matty Healy and George Daniel, No Rome’s slick beats are worthy of a bigger audience than an early-doors slot. He performs material centred on his most recent extended player RIP Indo Hisashi with the notable exception of his most famous song, Narcissist (more on that later). In many ways tonight’s support acts are lucky including and being labelmates with The 1975, they are guaranteed a sympathetic welcome.

‘Such is the raucous welcome for main support act Pale Waves to a three-quarters full Westpoint, you could be forgiven for thinking they themselves were the headliners.’

Such is the raucous welcome for main support act Pale Waves to a three-quarters full Westpoint, you could be forgiven for thinking they themselves were the headliners. Everything about Pale Waves screams modern pop act. The goth-lite image of singer Heather Baron-Gracie and drummer Ciara Doran jars pleasingly with the clean-cut guitarists. Appearances may be deceptive but the music is straight forward. Pale Waves’ sound takes the most commercial aspects of The 1975’s early sound and distils the living daylights out of them. The band recycle many of their own idiosyncrasies; the stop dead pre-chorus halt, the instrumental coda and repeating one-line choruses in a formulaic music-by-numbers approach that is safe and predictable while suggesting that had the headliners’ first album never reached public attention, things could have been very different.
Lyrically, there is a hint of the student notebook about lines like “I’ll be the sea honey, always, and you’ll be the tide”. That is not to say that Pale Waves cannot soar; they often do – and musically The Tide is perhaps the best example. As far as one-trick-ponies are concerned, it’s a damn good one. But it’s not a horse with anything else up its sleeve, so to speak. A new extended player and a development of their direction will be essential for Pale Waves to have the longevity for which they no doubt hanker.
Pale Waves’ set is surprisingly short for a band with a well-received debut album under its belt. In some respects, that’s ideal. Baron-Gracie’s Sharleen Spiteri hair-flicks and, in fairness, on-point vocal Dolores O’Riordan-isms are cuteness with limits – and perhaps better left with the listener feeling satisfied rather than over-exposed.

‘The 1975 are here. Britain’s biggest, and at the same time, most honest pop band make their entrance to a predictably pandemonic welcome.’

Darkness, the spark of a synonymous intro song and the illuminating of colossal installations of geometry. The 1975 are here. Britain’s biggest, and at the same time, most honest pop band make their entrance to a predictably pandemonic welcome. 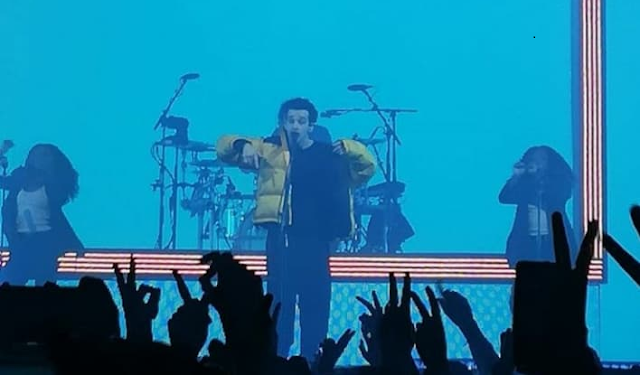 Leading off with some of the riches from their latest album, A Brief Inquiry Into Online Relationships, there is a head of steam up before the audience can draw breath or, in the case of animated frontman Matty Healy, literally before his bright yellow puffer jacket comes off. The Joy Division flavours of opener Give Yourself a Try and the unadulterated pop effervescence of TOOTIMETOOTIMETOOTIME signal a declaration of intent; most bands wouldn’t blow two of their biggest recent singles straight from the off, but few have the depth of quality material that the Manchester outfit possess off the back of three commercially, and increasingly critically, successful long players. “We haven’t been here for a long time,” says Healy, half-apologetically, addressing the 7,000 plus attendees in what feels like the world’s largest cattle shed.

‘There is absolutely no filler tonight in The 1975’s set.’

There is absolutely no filler tonight in The 1975’s set, the first half of the main set is split between content from the new album and previous collection I like it when you sleep, for you are so beautiful yet so unaware of it. The polished She’s Americanand choppy UGH! are two of the most accessible moments from the latter. It’s Not Living (If It’s Not With You) sits comfortably in a tradition of coded songs about heroin addiction, albeit few have sounded so upbeat; and by the end of the song, the sixth of the night, the band have successfully spunked three of the singles from the new record. Keep up.

‘Matty Healy is born to the role of frontman, focal point; you can’t help but look at him and enjoy how naturally it all seems to come.’

atty Healy is born to the role of frontman, focal point; enthusiastically compensating for any lack of on-stage dynamism in guitarist Adam Hann and bassist Ross MacDonald. You can’t help but look at him and enjoy how naturally it all seems to come. Some minor costume changes come and go, each greeted fervently by predominately female admirers. The band trigger the opening samples from Loving Someoneand before long Healy is strutting in full freestyling mode, appearing to moonwalk along a conveyor belt at the front of the stage, a popstar muse for the enormous sonic architecture created by drummer/producer George Daniel. They don’t possess a better song.
No Rome joins the band for their collaboration Narcissist; Healy lounges round the set with bemusement before joining in with faux-spontaneity. Giving a Dirty Hit stable mate a shameless turn in the middle of their set could feel like a contrivance but like all the others, the song bounces confidently into a strong hook which carries you along in the crowd, feet barely touching the ground. 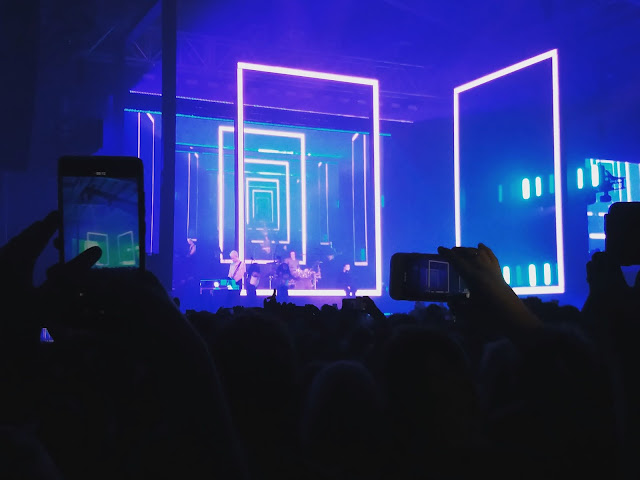 With trademark perversity, The 1975 then park post-rock/EDM hybrid How To Draw/Perichor as a counterpoint. It’s brave. Robbers then marks a regression to older, arguably more comforting material before I Like America and America Likes Me brings proceedings right back to the present. Words are emblazoned on LED screens, bringing a directness, even brutality, to the vocoder-treated Healy vocal. “Kids don’t want rifles, they want Supreme!” pleads the frontman, orating a State-of-the-Nationaddress. It’s an album highlight and the best of the evening, evidence of Matty Healy’s vision; a transformation from kitchen-sink confessor to a man with a perspective as wide as the world.

The hits genuinely do keep coming; Someone Else, Girls and new power-ballad I Always Wanna Die (Sometimes) bringing a close to the set proper.
Healy re-enters with just an acoustic guitar for Big Mistake, a tender song marred only by the depressing but sadly predictable chatter of modern concert-goers. No matter, Love It If We Made It rips back the attention with its existential “modernity has failed us” mantra over a backing described by Healy as “The Blue Nile on steroids”. The now time-honoured critical slights and insults levelled at the band are projected throughout The Sound. As the floor bounces to the simultaneous hammering of feet, you wonder how big the joke can get and how long it will be drawn out. On tonight’s evidence, no time soon.
After a 23-song set over nearly two hours, early single Sex closes the night and The 1975 are gone. There seems a suspension of belief before a robotic send-off gradually makes itself heard over the screaming. Good-bye. Or should that be: see you later?
The 1975 played:
Give Yourself a Try
TOOTIMETOOTIMETOOTIME
She’s American
UGH!
Sincerity is Scary
It’s Not Living (If it’s Not With You)
Loving Someone
The Ballad of Me and My Brain
A Change of Heart
Narcissist (with No Rome)
How To Draw (Petrichor)
Robbers
Falling For You
Undo
I Like America and America Likes Me
Somebody Else
Girls
I Always Wanna Die (Sometimes)
***
Be My Mistake
Love It If We Made It
Chocolate
The Sound