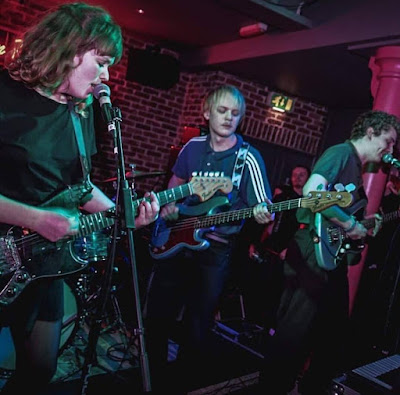 Pip Blom
Streaming a band online or listening to them on record is brilliant and is often the way we hear our new favourite band but there’s a reason gigs and festivals are more popular that ever; people want the different feelings they get from watching the bands they love. Pip Blom, No Violet and Violet at 60 Million Postcards gave unforgettable performances all with their own different merits.

‘Violet stand as one of the best young support acts the local area has had in years.’

First to the stage were Violet a local three piece fronted by petite teen Summer Begley slinging her guitar in a manner that Brody Dalle, Courtney Love and others would have been proud of. Summer presents in part grunge, part punk and part goth fashion with a tartan dress, longsleeved gothic fishnet top and ripped tights. The crowd could easily discredit her due to her age, but Violet stand as one of the best young support acts the local area has had in years. As is often the case with support acts there can be areas of improvement and although their sloppy sound must remain as it brought our ears nostalgically to legends Pavement it feels that with a few more gigs there will be more control to them as a band. Violet are a great band for fans of Pavement, Courtney Barnett, Nirvana and more. 2019 looks to be a promising year of sharpening what is already quite a sound!

‘With a melting pop of sounds probably closest to resembling an indie/grunge take on math rock No Violet played a chaotic sound with immaculate precision.’

With new releases on the way and an e.p. on the merch desk No Violet were on a successful mission to gain fans; one audience member asked the price of their e.p. mid set and later No Violet found themselves selling multiple t-shirts. Watching No Violet felt like the therapeutic outpouring of Ellie’s dark emotions with her confirming to me in conversation that she doesn’t exercise she gets everything out by singing. With a melting pot of sounds probably closest to resembling an indie/grunge take on math rock No Violet played a chaotic sound with immaculate precision. Pete and Kerry’s rhythm section was unmistakably rigid, every strike on the drums and every pick on the bass was placed perfectly anchoring both frantic guitars and at times Ellie’s hysterical-like singing. No Violet pitch their songs with care weaving between melodic sections and powerful riffs giving the audience time to mellow between choruses which had a large portion of the crowd headbanging.
‘Pip Blom have mastered venues of this size and will not be coming back to these same ones again’
By the time Pip Blom were due on stage the venue was so packed that Pip later confessed that she couldn’t see the back of the crowd. Fresh from winning 2 Music Moves Europe Talent Awards and dropping single Daddy Issues the band were ready for their Independent Venue Week tour planning to recreate the fun they last had in Bournemouth. Pip stated their last visit was one of their all time favourite gigs. The bands songs stand for themselves hence the critical acclaim and awards but the extra ingredient the band brought was their smiles which cast a spell on the audience who spread over the 60 Million Postcards dancefloor almost to the door. Pip Blom commanded their stage with the presence of the burgeoning stars they are; Pip bounced from hip to hip her face alive with delight, Gini nodded to every beat of every song, Darek steered the centre of the stage smirking with Gini regularly and Tender played with such energy he nearly lost his mic stand multiple times. Pip Blom have mastered venues of this size and will not be coming back to these same ones again, for the second time word around Bournemouth has spread at the infectious fun Pip Blom bring with them and we’re sure it won’t be long until other towns and cities feel the same.