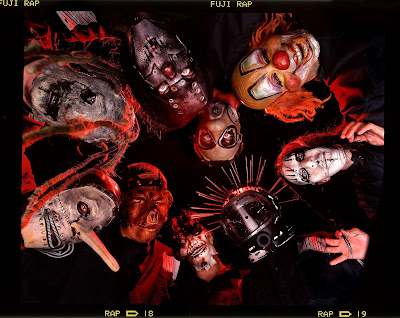 In 1999 now international Grammy award winning metal megastars Slipknot released their eponymously named debut album, an album that would go platinum in the UK and double platinum in America. 1999 was a time before social media and the internet being what it is today; Slipknot spread fear among parents in the way the Sex Pistols and Marilyn Manson did previously. James Wadsworth was fortunate to manage to track down Simon Clay, the photographer and brave parent behind the camera on one of their early UK photoshoots.
The majority of your photography career has been cars but today we’re going to focus on your day with Slipknot. Who was the shoot for and when was it?
It was probably 1999, it was either the day before or day after their gig at the London Astoria, so it was at the venue. I was working for Metal Hammer and we all [the photographers] got a bit of time with the band in the pit area [crowd area] in the day time.
We did the gig as well, you get like 3 songs of 15 minutes in the [photographers] pit. Back then because it was all film you used flash which would be pretty distracting to the band so that’s why.
Are you aware of what they were promoting with it?
They weren’t promoting anything exactly it was one of the early tours so we all [the photographers] got invited down to the venue.

Back at that time could people tell that they were going to be as big as they are now? Were they already a big deal in the media?
Yeah, they were a big deal, they were pretty well known in the scene but were getting a lot of attention because of the look.
Prior to the shoot had you listened to much Slipknot and were you a fan?
I’d heard a bit but not much, Otis [my son] was a big fan. He came to the gig too, he was in the crowd, but he kept close looking for me. It’s nice to look back on those kind of moments with your kids.
Did doing the shoot change your views on them?
Yeah, definitely, I’ve met quite a few famous people, but they were really nice. In my current [cars] photography I’ve met immensely rich people and most of them are alright but quite a few aren’t. They didn’t they were really engaging. They didn’t have to speak with us either, but they were great.
Instead of fearing Slipknot you actually took your eldest son to the shoot, how did that come about?
Nah it was on a weekend, I’m pretty sure it was a Sunday. I just took him because he liked them, and I wanted him to go. Being a dad, you can’t offer your kids much, but he was of the age where he could carry something, he wasn’t a baby. As a dad if you can take your kid along to do a few things that might stick in their mind that they might think ‘that was cool’ you do.
I had a photoshoot in New York photographing buildings for 3 hours [around the same time] and booked a helicopter. I took him on the photoshoot over Manhattan just because I thought I could do it, but he did start reading a comic when we were half way through shooting which I bollocked him for it because you don’t get a chance to do that especially now.
What did he think of it all? How did Slipknot act around him?
As I said they were all really cool. One of my memories is Otis and I playing hacky sack in the Astoria waiting around. They [Slipknot] were just mega cool, they weren’t rushed at all we chatted with them in their clothes and their boiler suits.
Are there any cool photos of him with Slipknot?
Unfortunately not, in the days of film you got your stuff and handed it all over to the magazine, a shame really that I don’t have much from that time. The clip test it is the only one I’ve got.
What is a clip test?
When you shoot transparency [normal] film, there is not a lot of attitude so back in the day we would cut a piece of film of and process it first, then you would go to the lab and assess it and and decide whether you left it the same or under or over developed the film to compensate.
How much guidance were you given around the piece? I suspect if any it was to create a vision of chaos?
It was just a chill thing in the venue, Metal Hammer would leave it up to you unless they had a specific request. Metal Hammer used a photo that I took that I thought was pretty lame, it was them standing with a backdrop.
Was it in a studio? Where in the country was it?
Nah, but I didn’t really know what to expect so I took loads of lights, they must have thought I was a right idiot. I really over engineered the clip shot but it came out really well, it might even be better lit than the similar one from Kerrang. I took a backdrop, nowadays I’d just find a grungey bit of the venue.
It’s very easy as a creative to be critical of your work, looking back now at the piece how fond of the outcome are you?