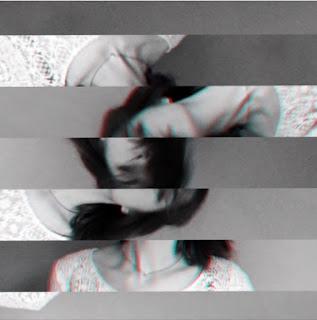 Mhairi became known to Underscore Part 3 firstly as a musician long before she started writing for us but after frustrations in the studio with the direction Mhairi’s producer had been taking her she was playing less and less. Mhairi moved from Bournemouth to Manchester thrown into the melting pot music scene she gradually started tinkering more with her guitar posting little pieces on Instagram which led to Mhairi playing a few open mic nights. With her self-imposed hiatus over Mhairi shocked us all (even her fellow writers at Underscore Part 3) dropping new track Moonface today on Soundcloud, thankfully it’s been worth the wait, lets hope there’s more of this to come.
Mhairi describes this song in her online post as one ‘For all you Scrooges out there like to feel miserable over the festive period’. This is Mhairi going back to where she is most comfortable with just her guitar, a heavy slathering of reverb, her enchanting voice and more loops than a packet of Hula Hoops! Within seconds of Moonface it’s very easy to compare the intricate guitar work to the work of Jeff Buckley, but with it’s watery reverb and Mhairi’s haunting vocal you question whether ‘Moonface’ is the mythical Siren monster that tragically could have taken the life of the great guitar player haunting us through Mhairi’s voice.
On closer listen if Mhairi is singing through the voice of Jeff Buckley’s Siren she is speaking of a tortured time, a female in her 20s aware of her own skill but trying to ‘sever deadweight’ whilst struggling to grow up and alluding to self-harm. Mhairi confirmed to Underscore Part 3 that this is an autobiographical track but drawn from retrospective feelings. Should we criticise Mhairi for the very literal lyrics ‘I don’t want to feel this anymore’ and ‘I don’t want to be me anymore’ or is 2018 the year where musicians are leaving behind their over pompous artistic egos to speak to their audience frankly? This winter we had political post punks Fontaines D.C. release their honest single ‘Too Real’ with the single line chorus ‘Is this too Real for ya?’ What will 2019 hold for the western world politically and what will happen to the mental health of our next generation of musicians? With females finally being listened to in the music world as more than just sexualised ‘twerkers’ we hope that this is the start of many more releases from Mhairi and hope that although this tune clearly has autobiographical elements we can celebrate positive muses in Mhairi’s life and not revel in her fantastic output as a troubled soul. This is Mhairi back at her best, what will 2019 hold for her.