Firstly, kudos to Fireball- Fueling the Fire, as music journalists we go to hundreds of gigs but I cannot remember one where every band member from each band had so much fun, whatever Fireball do on their tours they’re clearly doing it right! The addition of well known rock TV presenter and DJ, Matt Stocks between bands was a unusual but welcome addition for a punk gig that added to the whole feel of the night. The atmosphere flowed onto the crowd with free fireball shots, free merch and confetti cannons with drink vouchers, seems Matt from The Bronx prediction of crowd members waking with Fireball addictions is likely to be true!
First on is local legends of the South coast scene Black Water County who got their place on this bill by winning a national battle of the bands competition; the sceptical person would question this 5-band value for money bill but when Flogging Molly’s Dave King gives Black Water County a separate (and biggest) thank you to them during his set describing them as ‘fucking beautiful’ what more endorsement can they need! The very best in upcoming folk punk, will this be a catapult to bigger stages? Catch them while you can!
Lost in Stereo continued the night in party fashion pumping out high energy pop tinged punk rock winning over the crowd. LiS are clearly a band with confidence in what they’re doing calling for a very early bold crowd hand clap which pays off perfectly. It’s rare at 7.30pm to see a steadily growing crowd clapping along in time, who knows if they came with these fans or won them over, but the crowd absorbed the energy of these loveable young bouncy pop-punkers and throw it straight back at them. Winning crowds over like this and winning Fireballs Hottest Band of 2018; 2 bands in and 2 bands with futures, the crowd made the right decision turning up early.
Face to Face command the stage like the veterans they admit they are commenting that they’re old enough to be parents of the last two bands. With a history dating back to 1991 they step up the night to a level of polished that can only come from years of touring. Face to Face assault the crowd with tune after tune of punk rock and with the most well-crafted rhythm section tones of the night they deservedly get the first big movements on the dancefloor. Face to Face are a band for the fans of the Tony Hawks generation of punk which proves to be very much still alive with NOFX taking over Slam Dunk Festival’s 2019 Hatfield event. FtF continue to bring a night brimming with value for money. 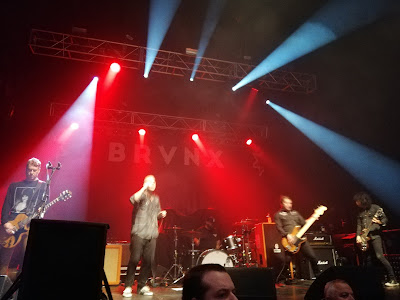 The Bronx prove that although there are thousands of bands touring the world ‘going through the motions’ playing their songs perfectly but without soul there are thousands that play with such heart and charm, instantly The Bronx show that they are the second of these descriptions. Lead singer Matt jumps, dances and screams around the stage all whilst having a cheeky smirk on his face proud of the bands achievements, to add to this the rest of the band throw themselves around the stage with glee. On at least 3 occasions Matt breaks the wall between the crowd and band clambering over the crowd barrier to sing full songs in the mosh pit with his mic cord trailing over the heads of the audience. One would assume this is a regular part of the set as their female crew member and Matt seem to manage this mic cord trailing with consummate ease. Matt told the crowd at one point that ‘all I want for Christmas is a little chaos’ which he most certainly got and probably gets every night on tour. The Bronx, a band that bring 100% all of the time! 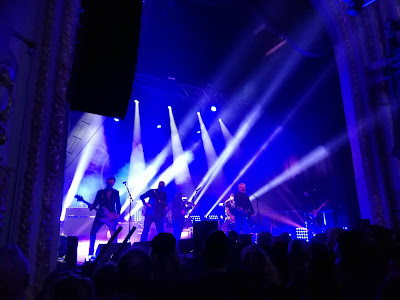 Tonight’s headliner Flogging Molly brought the whole room to a frenzied dancefloor bringing the audience up and down with equal numbers of Irish jigs as mellow numbers, a setlist picked to keep the crowd well-orchestrated. In true Irish craic Dave’s between song banter could not be faulted as he thanked every band, every member of his own band, the tour, the venue, the crew, the crowd and many more; it’s clear that Flogging Molly is Dave’s band, but he doesn’t forget that their success is thanks to so many people. Bournemouth were treated to 2 rarer tracks as a medley, one written about Dave’s son and one written about his dad. For an unplanned medley due to Dave’s son seeing him (and being in the audience) for the first time in 3 years this was a real highlight of the set; we all at Underscore Part 3 sincerely hope this reunion went as good as the medley. During the encore Dave’s son was then on stage getting the crowd to sing happy birthday to his dad whose birthday was 2 days previous. What a night, what a party, what an end of tour! Underscore Part 3 can’t comment on the aftershow party at the venue with all invited to stay that Matt from the Bronx DJing but if the gig was anything to go by we can guess it was a belter of an aftershow with rumours the band would join the crowd for drinks. Flogging Molly head straight to Ireland they’ve got something special to look forward to.