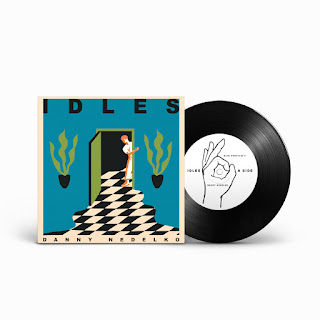 Often split singles are the product of 2 financially strapped bands who want to share the costs but in this case both bands have had their own releases previously. This is a piece of artwork: visually, creatively and musically a snapshot in time of two best friends and 2 twin designers. When James Wadsworth met with Joe Talbot of IDLES and Danny Nedelko of Heavy Lungs the pair oozed companionship in the same way that a new couple can’t hide their fondness for each other. The pair are so fond the single is literally 2 songs written by two men in honour of the other. Being cheeky James challenged them to a ‘his and hers’ style relationship quiz, watch the video below to see how well they know each other.

Continuing the theme of unity for the 2 covers of this single the bands chose to use twin artist duo George and Raphael Greaves the co-founders of their own company Printed Goods. This is no gimmick, ironically as soon as the camera was switched off after chatting with Danny he lifted his jumper suddenly remembering he was wearing one of the duo’s shirts underneath. Further investigation on Printed Goods website reveals Danny Nedelko modelling all their shirts. George and Raphael designed one side of the record each using a simple styling which instantly resonates with the Matisse style. Printed goods have released an ‘artist series’ of shirts with their Matisse t-shirt piece having similarities to both the single covers. Both single covers feature black and white check flooring as a prominent feature and although the inside and outside world are unclear on them it seems that on the IDLES side the figure has opened his door inviting you in and on the Heavy Lungs side it could be felt that the character is entering building; this could represent inviting in and entering a ‘safe space’. The above paragraph can be read with much interpretation but whatever your interpretation is it’s wonderful to have post-punk that visually is thought provoking and not just musically. Both sides of the vinyl label have a hand doing the ‘ok’ gesture something which has almost become a ‘logo’ of IDLES. IDLES are the heavyweight in this game of two, with albums under their belts so if anyone had to be side one it was obvious it would be them which it is. Personally, I would have liked both sides labelled but neither side being ‘side a’ as a sign of equality.
‘Danny Nedelko’ starts very musically simple with a steady pair of notes on the bass and a driving beat on the guitar with a top layer of wailing on the high notes of the guitar. IDLES have a strong rhythm section with very clear tones immediately stamping them as IDLES to any regular listener to the band. It is not often a band is defined just as much by their musical sound as it is their lyrics but when it does happen it often leads to longevity in the band, we shall have to wait to see if this is the case with IDLES. When the vocals start we are treated to slightly more elaborate guitar playing but the predominant plan with this ‘riff’ (questionable if it is one?) is to create a frenzied feeling which it does. By the chorus we are treated to a proper riff and sing along with the lyrics ’Fear leads to panic, Panic lead to pain, Pain leads to anger, Anger leads to hate, yada, yada, yada, yada, hey, hey, hey, hey, Danny Nedelko.’ The whole song is a political ode to the people that Joe feels make the UK the great country it is which he says is immigrants. Danny is originally from the Ukraine who has settled here legally with his family, Joe sums up his legitimacy describing his friend as ‘innocent’ and later in the middle 8 spelling out ‘community’. The themes that seem to resonate with fans of IDLES and the belting sing-along chorus will make this a staple in IDLES set for years to come. A track this good is hard to fault. 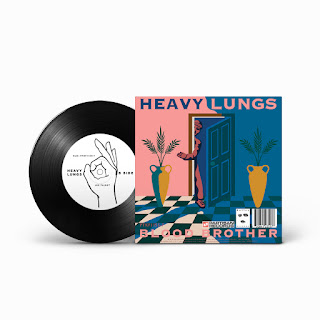 Heavy Lungs; what a band, a band that should blossom into something special in the next few years. With their side ‘Blood Brother’ Heavy Lungs have created a singalong which comically has such unclear vocals leading the listener to wail along with Danny making up their own version. Could that last sentence be more ‘post-punk’! Listening to ‘Danny Nedelko’ and ‘Blood Brother’ back to back whilst looking at the slightly matching covers has led me to question if Danny and Joe spoke about instrumentation when writing their ode’s to each other. The sound is very different on the tracks and although ‘Blood Brother’ starts with more of a grunge riff than ‘Danny Nedelko’ both songs have taken a stripped-down drums, bass and vocals verse instrumentation with only light guitar. By the ‘Blood Brother’ chorus we’re bouncing along to the lead riff and our self-constructed sing-along wails before the chorus finishes a guitar line which sounds heavily influenced by Felix White’s playing on The Maccabees X-Ray. Having spoken to Heavy Lungs they revealed how diverse their influences are which leads me to suspect The Maccabees who have inks with IDLES may have genuinely been and influence for the Heavy Lungs boys. In true post-punk styling the band have opted for a cacophony rather than a standard middle 8 before Heavy Lungs finish with one last sing along. ‘Blood Brother’ is a song with a lot of potential which got me shouting along without knowing the words but there is an indescribable something missing in the production quality. It has a similarity to the polished step IDLES took from first album Brutalism to their latest effort. Sometimes a little bit of extra production on post-punk can go a long way. To get to know Heavy Lungs listen to their 2018 debut EP Abstract Thoughts packed full to the brim with standout tracks but peaking in potential with haunting track ‘Stutter’. Heavy Lungs are spending the start of 2018 writing, let’s see what they can give us next! Personally, we’re excited!