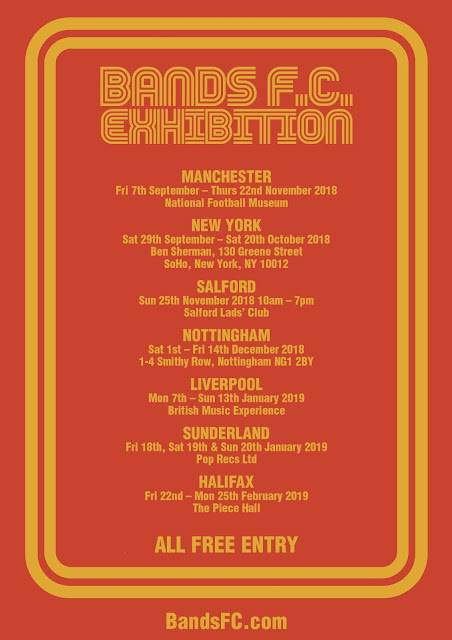 was all about discovering it was a duo’s project to create logos for bands created from current football teams. To learn more James Wadsworth spoke with Nick from Bands FC to find out more.
Who are Nick and Mark aside from the creators of Bands FC? What’s your backgrounds?
I’ve worked in music for quite a while, I had a regular life for a bit but I was always such a music fan I wanted to work in it. I met Tim Burgess from the Charlatans and we started a record label and I started doing some merchandise for the bands which everyone went a bit crazy for. I do music festivals, I’ve done Kendal Calling for 12 years and I do Tim Peaks with Tim Burgess.
Mark is an artist and graphic designer, an actual painty artist. He teaches art as well, so we came together, he obviously loves music too and that was that. There’s no defined role, it’s about the brain power to do it and anyone can do that!
Can you tell our readers what on earth Bands FC is?
We’ve boiled it down to the actual bare bones; bands as football teams, football teams as bands. That says everything. We don’t do cricket teams; we’ve been offered by county cricket teams [to do their Bands FC style logo], we don’t do rugby teams; we’ve been offered by professional rugby teams [to do their Bands FC style logo]. [We wanted it to be that] within one minute someone who’s never heard of us before can be putting ideas in, thinking of stuff. Nothing cleverer, nothing stupider.
Can you tell me about the eureka moment in July? How did it all come to you?
The three of us [Nick, Mark and Tim Burgess] got talking after a Charlatans gig and came up with this idea, it was originally my idea. 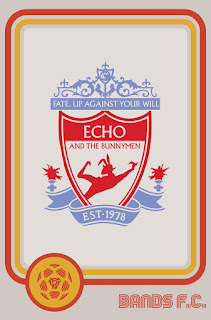 And what was the first one you made?

The Liverpool badge redone as Echo and the Bunnymen. So the thing about that one, there’s a lot of detail in that badge from the Liver bird to the raw iron gates that are above Anfield. There’s the title of the song that’s linked with the club and other stuff. We switched those; Echo and the Bunnymen use an image for their logo which was as simple as the Liver Bird so we chucked that in. We put the killing moon and put the dancing horses which are both Echo and the Bunnymen songs. We shared it with ourselves with our close friends and we got a reaction that we thought, well this was more than just swapping that for that.

The next one we did was The Wu Tang Clan which was almost the opposite because Wolverhampton Wanders don’t use anything apart from the wolves’ head with their really familiar black and gold. So we thought is there a band that doesn’t write their name, that just uses a symbol, Wu Tang Clan have their famous bat. So, we swapped that for that. 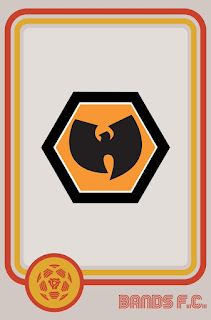 They were the first two but they covered a massive spectrum of one with no words on and one with lots of what you might refer to as crossword clues. They’re kind of bookends, there’s almost every band and club in between.

Did England’s football success have an impact on how it all came about?
The world cup was about to come up and we’d done a big festival where the Charlatans took over Northwich and did events every night and an exhibition. We said what next and next was the world cup. If bands aren’t more footbally nobody wants to know because every program is about football. It was kind of done as a joke, The Wold Cup swamps everything but if you make your music somehow footbally you’ll [get media attention]. 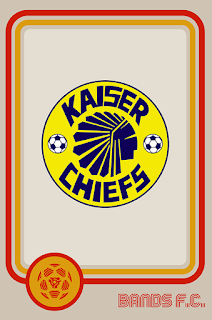 Would you count yourselves as football fans first or music fans? Is there a correlation between them both?
It’s hard to say because everybody’s life is this amalgamation of stuff and our footbally things comes from growing up and football cards, collecting stickers.

Neither of us are partisan to one and that’s really helped. I go to quite a bit of football, I got to Manchester City, I go to Manchester United, but I learnt early on in school that if you vehemently support one you can strut around when you’ve won but you’re going to be taken down a peg or two when they’ve goofed up. I then found [with bands] there was a thing that didn’t have that, you didn’t care if somebody didn’t like the music you liked. If you go to a gig you don’t come out having watched a band and lose 1-0. Everyone there enjoys it. That’s a part of it.

We’ve got a commission at the national football museum and what you find without being two sexist is there’s a lot of dads and lads. The dads will be looking at the Oasis badge dreaming about when they went to see them before their kid was around and the kids looking ‘wow Manchester City’. You watch that change from when they’re 11 or 12 they may be aware of some of those bands whereas when they’re 7 or 8 they’re just bothered about the clubs. It’s almost like your little life of growing up, so many people switch from football to music.
There’s an [event] coming up, 100 years of Leeds United, the Kaiser Chiefs are going to play. Throw in the third thing that The Kaiser Chiefs are actually named after a South African football club. It’s group mentality, you enjoy going to a gig because you’re with like minded people even ones you don’t know. 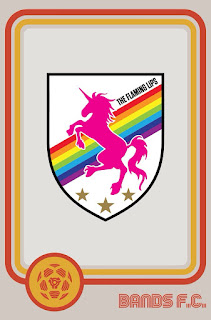 The classic length of time of a gig is 90 minutes, that’s a headline set because it’s the amount of time that something’s kind of enjoyable for. There’s so many links and it’s from talking with people that these things come out. Is talking to you [interviewer James Wadsworth] like extra time/ an encore. If you’ve not got into a gig by the encore, you’ve lost. You’re not taking part as an audience member at a football match but you play your part, a band and a team will comment on the crowd. 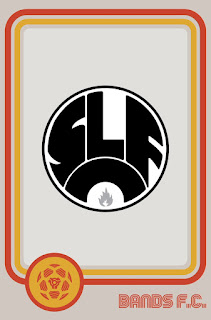 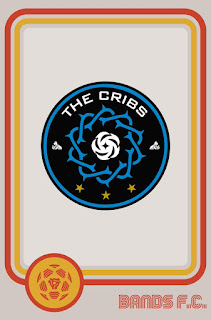 What are your favourite bands?

First band I ever went to see was Stiff Little Fingers and Jake Burns the singer is a big Newcastle United fans so we did Stiff Little Fingers as Newcastle United. Jake got in touch and asked could we send him a copy to his house in Chicago. Which was amazing for me! I like The Clash, I like The Flaming Lips, my musical taste is pretty broad, I spend a lot of time at music festivals.

We did The Flaming Lips and they got in touch and said ‘hey, should we make some football shirts’.
What famous names in the music or sports world have shown appreciation for your work?
We went to Salford City yesterday and we designed their programme, we did a badge based on theirs. Gary Neville owns the club and met with us! 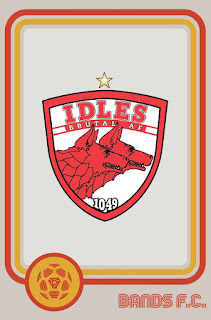 Cribs helped with their badge, we worked with IDLES on theirs, it’s about new bands as well.

There are some very clever ones that are a real nod to the band and a certain bit about them or a song. What ones are you most proud of?
Our Beatles one is the cryptic crossword type. The club is not Everton or Liverpool it’s Villa Real whose nickname is the yellow submarine, that’s an official nickname, so we went for that. Mark designed that one with about 15 hidden clues in it. The 910, there’s a Beatles song ‘The 1 After 909’. There’s 2 living Beatles, 3 have died [referenced in the crown]. The black and white stripes, Abbey Road. Sgt Pepper is in there too. 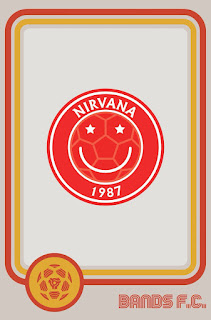 People saw one’s that we didn’t.  So Pixies, we used Lincoln, which the badge is the Lincoln Imp, the famous [decoration] from the cathedral so we dropped on bits from the cover Dolittle, there’s some lines and some hidden numbers, 5, 6 and 7 from the song ‘This Monkey’s Gone To Heaven’. It says ‘god is 5…’. Someone pointed out another thing that is clever is Pixies are from Boston and the UK Boston is in Lincolnshire. We knew those separate facts but we didn’t do it on purpose.

We did Nirvana as Aberdeen though because Kurt Cobain was born in Aberdeen.
I like the Franz Ferdinand one, we put up some work in progress options and Alex Kapranos (lead singer of Franz Ferdinand) said he liked [a particular one]. So we used that! [The history of this is] Arch Duke Franz Ferdinand 1914 was assassinated in Sarajevo in the event that was said to have started World War 1. The [Franz Ferdinand] badge is based on FK Sarajevo. 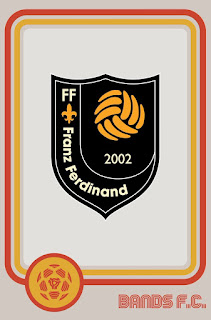 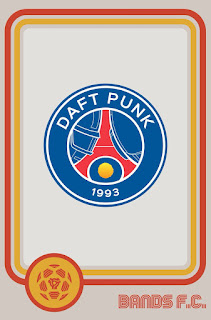 Daft Punk, the two robots from Daft Punk are hidden in the Paris Saint-Germain logo, we thought they were quite obvious [but people said they weren’t]. Daft Punk got in touch via their record label and asked us to send them it.
I’ve heard you’ve linked with lots of charities, can you tell me about that?
Pulp have got a great football link; their drummer Nick Banks has an uncle Gordon Banks that won The World Cup with England. We worked with Pulp and we made shirts that we sold for 1 day. We donated the [profit] to Sheffield Children’s Hospital, we made £30,000 (profit) in a day! Jarvis Cocker bought one.
We do enamel badges where the bands chooses a charity. We’ve done those with The Charlatans, Public Service Broadcasting, Chaz and Dave and Maximo Park. 1,000 Frightened Rabbit badges sold out in 2 minutes. We give people fair warning [for our special badges] on Twitter.
We sponsored 2 small football teams. We’re their shirt sponsor.
We’ve done £48,000+ for charity, that’s since September 2018. Public Service Broadcasting made £2,000 for Bowel Cancer charities which is something that close to the bands hearts. Camera Obscura lost a member to Sarcoma so we did t-shirts and sweatshirts with them. The enamel badges for The Charlatans went to brain tumor organisations, The Charlatans lost a member John Brooks to illness as a result of a brain tumor. 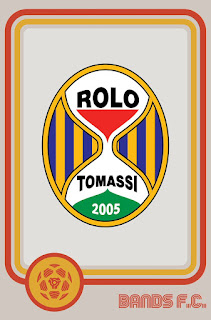 We’re just talking to Rolo Tomassi, we did a design this morning and they got in touch to do a charity badge for charity. That’s not been announced yet but is nice to be able to say.

What’s next for Bands FC?
Same thing, we’ve not even hit our stride yet. We’re doing exhibitions, we’ve been to New York, we’re going to the British Music Experience in Liverpool. We’re a bit like a band, we actually keep it quite samey but get bigger and do more.
We’re sorting the line up for a day at Kendal Calling Music Festival. 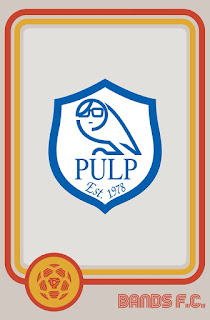 Where can we find everything Bands FC related?

Any other music or sports for our readers?
No, we love hearing from people and seeing what they think, and ideas and potential bands, we’re always game for it.